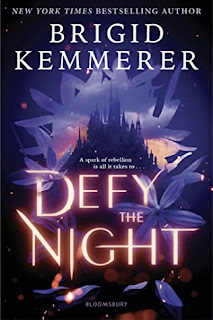 Title: Defy the Night
Author: Brigid Kemmerer
Publish Date: September 14th, 2021
Publisher: Bloomsbury YA
Source: Huge thank you to Netgalley and the publisher for providing me with an ARC for review!

From New York Times bestselling author Brigid Kemmerer comes a blockbuster fantasy series about a kingdom divided by corruption, the prince desperately holding it together, and the girl who will risk everything to bring it crashing down.The kingdom of Kandala is on the brink of disaster. Rifts between sectors have only worsened since a sickness began ravaging the land, and within the Royal Palace, the king holds a tenuous peace with a ruthless hand.King Harristan was thrust into power after his parents' shocking assassination, leaving the younger Prince Corrick to take on the brutal role of the King's Justice. The brothers have learned to react mercilessly to any sign of rebellion--it's the only way to maintain order when the sickness can strike anywhere, and the only known cure, an elixir made from delicate Moonflower petals, is severely limited.Out in the Wilds, apothecary apprentice Tessa Cade is tired of seeing her neighbors die, their suffering ignored by the unyielding royals. Every night, she and her best friend Wes risk their lives to steal Moonflower petals and distribute the elixir to those who need it most--but it's still not enough.As rumors spread that the cure no longer works and sparks of rebellion begin to flare, a particularly cruel act from the King's Justice makes Tessa desperate enough to try the impossible: sneaking into the palace. But what she finds upon her arrival makes her wonder if it's even possible to fix Kandala without destroying it first.Set in a richly imaginative world with striking similarities to our own, Brigid Kemmerer's captivating new series is about those with power and those without . . . and what happens when someone is brave enough to imagine a new future.

This was such a delightful page turner with layered characters and an excellent storyline! Very impressed with this author's writing style. I'm going to be reading her A Curse so Dark and Lonely trilogy very soon!

I really like the world building in this book - I could pretty clearly see the different sectors in my head, and I felt like I could picture everywhere Tessa went! As for Tessa herself - loved her! She was fierce and fiery, fighting for what she believed in and what was right, and she was just downright entertaining. Her sass and defiance was awesome! King Harristan and Prince Corrick were also really well written characters. They had so much depth to them, I enjoyed every minute of unpeeling their layers.

This was such a great start to a series - I'm super excited to see what happens next! Only one book in and there's already been some major twists and turns, and a romance that I quickly fell in love with! This is definitely an author to keep your eye on!

Posted by Penelope @ The Reading Devil at 03:00